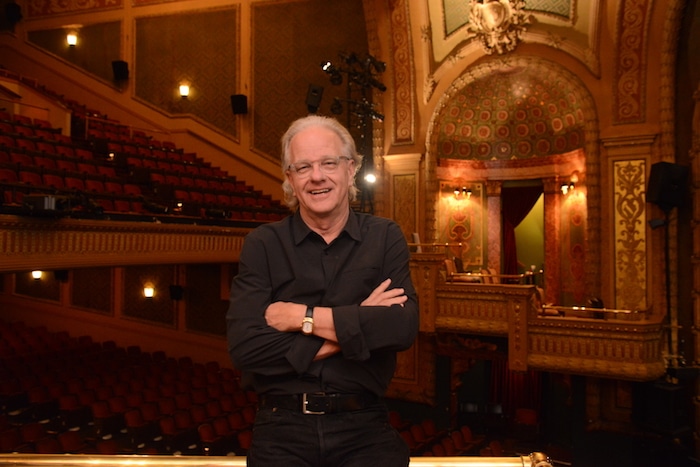 Since 1915, Austin’s Paramount Theatre has been a shining beacon to central Texans seeking exciting and eclectic performances. Its gloriously restored blade and distinctive marquis blaze forth, announcing that magic is about to be made.

From comedy to music, theatrics to political commentary, classic films to cutting-edge cultural events, the Paramount and neighboring sister, the State Theater (or “Stateside”), transcend the past.

“No strictures to what we can or can’t do,” said Jim Ritts, CEO and executive director of the Paramount and Stateside, as he sat in the original 1935 film projection and vault room and chatted with Top Trip Rentals. “[The Paramount’s] a connector.”

Ritts recounted a special time when he experienced the power of the Paramount.

That night, Ritts met a father/son duo attending the show. That night was the boy’s 13th birthday. The father’s father, Ritts learned, had taken him to the Paramount for the same show on his 13th birthday.

“I choked up. This place is truly the fourth character in every performance; it’s what is central—the Paramount, Holbrook’s Mark Twain—and the river flowing through connecting a grandfather, father, and son.”~Jim Ritts

Artists who perform here also attest to the theatre’s impact. Ritts pointed out that many—he mentioned Lyle Lovett, specifically—were inspired here, and subsequently chose the venue to kick off tours and new releases. Lovett’s not alone. The theatre estimates that some 10,000 performers have graced the stage throughout the Paramount’s storied life. And every year, more than 200,000 audience members experience the Paramount’s magic.

The Paramount opens minds, hearts, and doors through a variety of outreach programs.

The Summer Classic Film Series Family Film Festival introduces young and old alike to the wonder and joy of iconic movies. With discounted prices and matinee times, the weekly series is a wonderful way for adults and kids to pass the dog days of Austin’s summer months.

And did you know that the Paramount Theatre plays a role in SXSW Edu? That’s right; the Paramount staff has promoted the importance of arts education at this annual Austin conference (here’s the 2018 SXSW Edu schedule).

The Paramount Theatre’s “Moontower Comedy and Oddity Festival” is as unique as those iconic Austin light towers. During the festival, a wealth of comedic genius graces stages around ATX with more than 100 live performances.

Be sure to take a look at the Paramount Theatre’s current list of events (films, shows, performances) when you plan your next night out. When you book a stay at Littlefield Lofts on Austin’s signature 6th St., you’re just a short walk from the Paramount and State Theatre (between 7th and 8th St.), Congress Avenue, and the stately Texas Capitol grounds.

Whether you went Paramount or Stateside, we want to know about your ATX cultural night out.

What’d you see? What did you wear? Was your night special? Did you make a Paramount connection?

Tag us at @TopTripRentals so we can feel the magic.